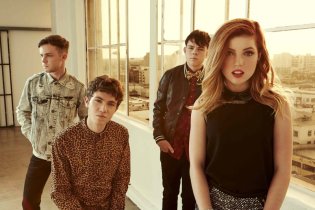 Echosmith, the new all the rage indie pop band, consists of four siblings and was formed in the Toluca Lake area of L.A. Since their formation in 2009, they have had a song featured in an NBC promo for the 2012 Olympics and their hit single “Cool Kids” featured on the Billboard 100.

“Cool Kids”, which was on Echosmith’s debut album Talking Dreams released in 2013, has recently taken over the air waves with it’s whimsical and funky beat paired with Sydeny Sierota’s vocals. Another great song to listen to on the album is “Come With Me”.

Definitely give their stuff a listen!

I was born and raised in the South but decided to take a chance by going to school in the Northwest. Since I was little I have been obsessed with fashion and cooking (accept me, Cordon Bleu!). Always have tried to find the humor in every situation and make the best of the hand I was dealt. Life is beautiful and I wish to share the beauty of it with y'all. View all posts by ShortSweetandLovely